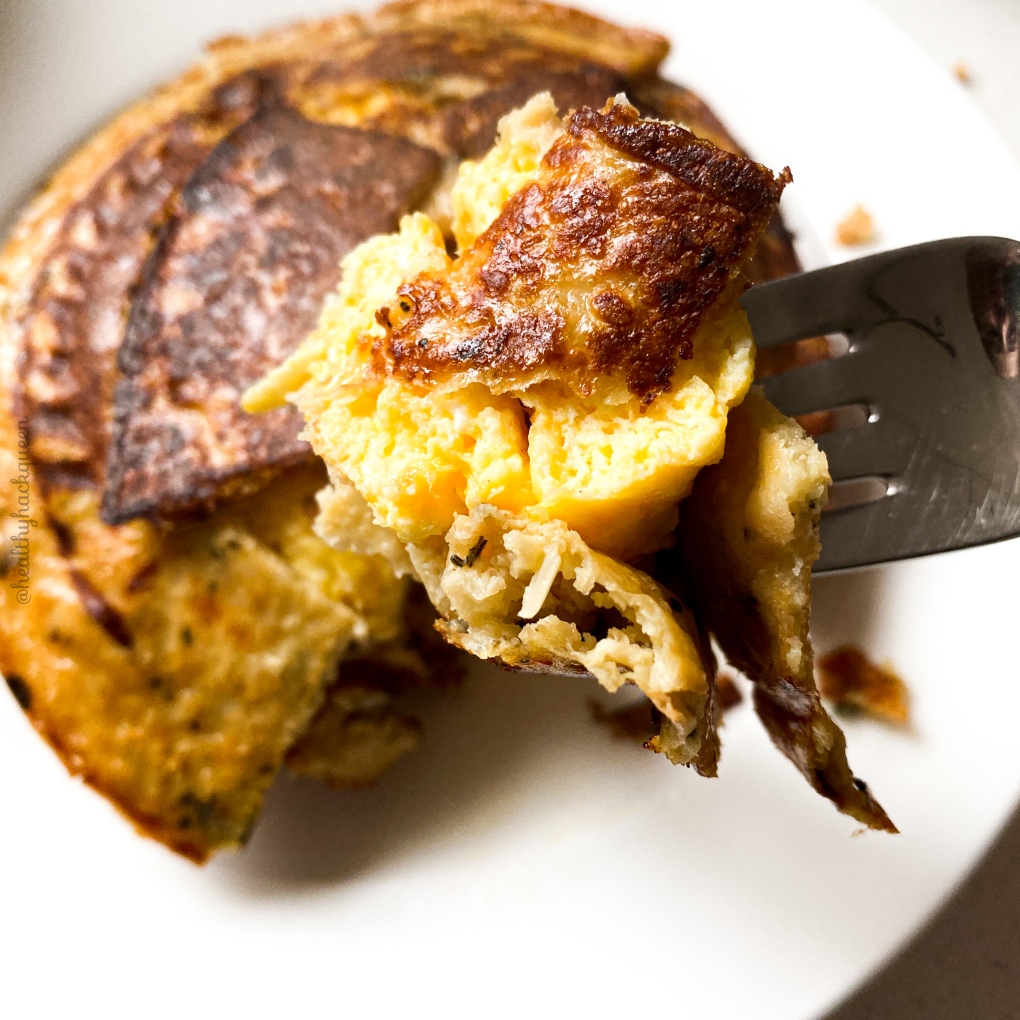 I am a HUGE fan of Outer Aisle and their cauliflower crusts {use code HACKQUEEN for a 10% discount!} I recently connected with them on Instagram and they sent me some crusts to work on some hacks. I love making pizzas and tacos with their crusts, but I recently purchased Dash’s pie maker and I wondered how the crusts would hold up in there. The answer? Life changing. I literally felt like I was eating something with a super carb-y, flaky crust. No joke. I was floored. I’m still perfecting my chicken pot pie recipe and I’m sooooo close, but first up: egg and cheese quiche with crust. You could even call it a pie, since the crust is on the top and bottom. It’s flaky and delicious and the filling options are endless. Plus, it’s super easy to do. The hardest thing is literally coming up with fillings to complete your Lean & Green, since one large crust equals 1/3 Lean and 1 Green. With this egg and cheese pie, you’ll still need two greens, but it’s awesome with a side salad.

One note: I used the Italian crusts this time, but I’ve tried them all and every flavor is delicious.

Hope you love these as much as I do!

The math is a little funky, but if you’re interested: basically the crust, the whole egg, and the cheese equals 11/12 of a Lean and the added two tablespoons of egg white are as close as possible to 1/12 of a Lean

PS. The sandwich thins from Outer Aisle also fit, but the portion size is three crusts for 1/2 Lean and 1 Green. You could always use two of those and then alter your fillings to complete the Lean and Green, and use the third for something else in the same day. I like using the larger crust and having 2/3 Lean to play with for my fillings instead.

PS. You’ll see I have a few different baking dishes in the pics. I’ve made it a few times and ultimately, I like the square or rectangular dishes the best. The round one wasn’t big enough, but I had the best lighting that day, lol.

You guys asked for a recipe and here’s my latest obsession! It’s from @jillmckeever and it’s something I eat DAILY. No joke.
Whether you started a New Year’s resolution on the first of the year or on Monday (or even if you’ve been working at it longer than that), it’s so important to remember that it’s NOT all or nothing. One meal off plan or even one day (or more) doesn’t mean you failed. And it doesn’t mean it’s over.
Who wants to eat potatoes and lose weight? I know I do! 🙋🏼‍♀️🙋🏼‍♀️🙋🏼‍♀️
The fact is, that’s what it takes. Anyone who has achieved their goals will tell you that regardless of what obstacles they faced, or challenges that met them on their way, they never gave up. It’s the same thing with losing weight. You must make the choices day in and day out that will get you closer to your goal. Is it easy? Honestly, some days it is. But it’s those days that it isn’t—a party, a dinner out, those moments we want to eat our feelings, those moments we have a craving, and, and, and—it’s those moments when what we choose makes all the difference. Losing weight is truly a matter of ounces. Every bite really does count. It doesn’t mean you can’t have splurges or that you can’t enjoy food. In fact it’s the opposite. You definitely can. But in those instances, how much you eat really does make all the difference. So keep your eye on the prize and BE RELENTLESS. If you want to hit your goal weight—and stay there—you have to decide what’s most important and how your decisions get you closer or further away from that dream. You’ve got this!
Hey everyone! I know it’s been forever, but it’s taken me some time to figure out what works long-term and I wasn’t comfortable sharing before I could do so with confidence. I feel like I’m finally there (lost and kept off 10 lbs, and now going for more) and excited to share.
I’ve found a number of things that work for me in terms of weight loss, but there are three that are key—regardless of what sort of diet you follow.
Thank you all so much for your incredible support! The sheer number of comments and private messages of support in response to this weekend’s post was overwhelming. You certainly made me feel like I’m not alone in this and I want you all to know, if you’re feeling the same way, YOU ARE NOT ALONE.
Four months.
I can’t believe I’ve been offline for a full month, but I’m back! Sorry for the absence, but I moved and wasn’t able to cook/hack. That said, I cannot wait to show you guys my new kitchen—I’m in HEAVEN! I also moved into a place with incredibly high ceilings and custom doors, so no more over-the-door storage for me. Doesn’t matter tho—I found these amazing bins at @thecontainerstore and I AM IN LOVE! They hold fuelings perfectly! And they make me feel so put together. 🤣